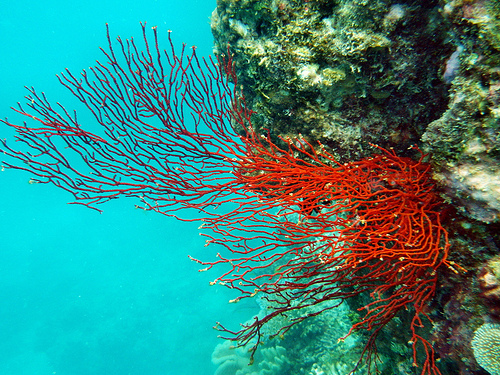 Modern humanity’s appetite for finite resources is so great that even one of the great wonders of the natural world is not off limits.

Last week, the Australian government approved a project in the state of Queensland that will be the biggest coal mine in the country, and one of the largest in the world.

There is great concern that the mine will pose a huge environmental threat to the Great Barrier Reef, as the coal will need to be transported to a port terminal for export. Environmentalists believe the mine will endanger the Great Barrier Reef by increasing the amount of shipping in the region. Furthermore, from a global perspective, the carbon emissions from burning coal threaten the reef by accelerating ocean acidification and rising water temperature, which can lead to coral die-offs.

The Great Barrier Reef is the largest coral reef ecosystem on earth and one of the seven wonders of the natural world, but that isn’t enough to stop humanity’s exploitation of fossil fuel energy.

The proposed Carmichael mine, owned by the Indian company Adani Enterprises, would produce 60 million tons of coal per year, and 128 million tons of carbon dioxide per year – approximately four times the annual greenhouse gas output of New Zealand.

The Guardian reported that the mine project has been plagued by legal challenges and protests from environmentalists and Aboriginal representatives and complications around its financing. Fourteen of the world’s leading financial institutions have refused to finance the project.

For now, though, the mine is cleared to proceed. The Great Barrier Reef is a living ecosystem and includes over 2900 separate coral reefs, and is home to some 600 types of soft and hard coral, 1625 species of fish, as well as 133 varieties of sharks and rays. It has has over 2000km of mangroves, with species representing 54 per cent of the world’s mangrove diversity.

The GBRMA has said that “conserving the reef’s biodiversity is not just desirable – it is essential. By protecting biodiversity, we are protecting our future and our children’s future.”  Yet in 2014, the GBRMA approved a permit for a state-owned coal terminal operator to dump as much as 3 million cubic meters of dredged mud and sediment inside the park.

Geoff Cousins, president of the Australian Conservation Foundation, said “To approve a massive coal mine that would make species extinct, deplete 297 billion litres of precious groundwater and produce 128.4 million tonnes of CO2 (carbon dioxide) a year is grossly irresponsible.”

Cousins also noted the irony of the project, saying, “At a time when the world is desperately seeking cleaner energy options this huge new coal mine will make the effort to combat climate change all the more difficult.”

It truly doesn’t make sense to have world governments pushing for a climate agreement in less than two months from now in Paris on the one hand, and on the other hand continuing to support more development of dirty fuels.

Most of the Carmichael mine’s coal will be purchased by India – the world’s third-largest carbon polluter.

The outlook for all coral reefs throughout the world is dire. The Earth has entered its third worldwide coral bleaching event of the last 20 years, due to warming ocean temperatures.

Over a million species are thought to live in and around coral reefs, while an estimated 500 million people derive food, livelihoods and other benefits from coral reefs throughout the tropics.

As the eyes of the world turn toward Paris and the climate talks, we have to keep in mind that can’t have our cake and eat it too. Perhaps governments should be asked if they want future generations to enjoy sights like the Great Barrier Reef. Either we seriously commit to reducing carbon emissions, or we stay stuck on a path of rising emissions.

Do we want clean energy and a brighter and healthier future, or continued reliance on polluting, finite fossil fuels? With a world population on track to hit close to 10 billion people by 2050, we need to make smart choices today.