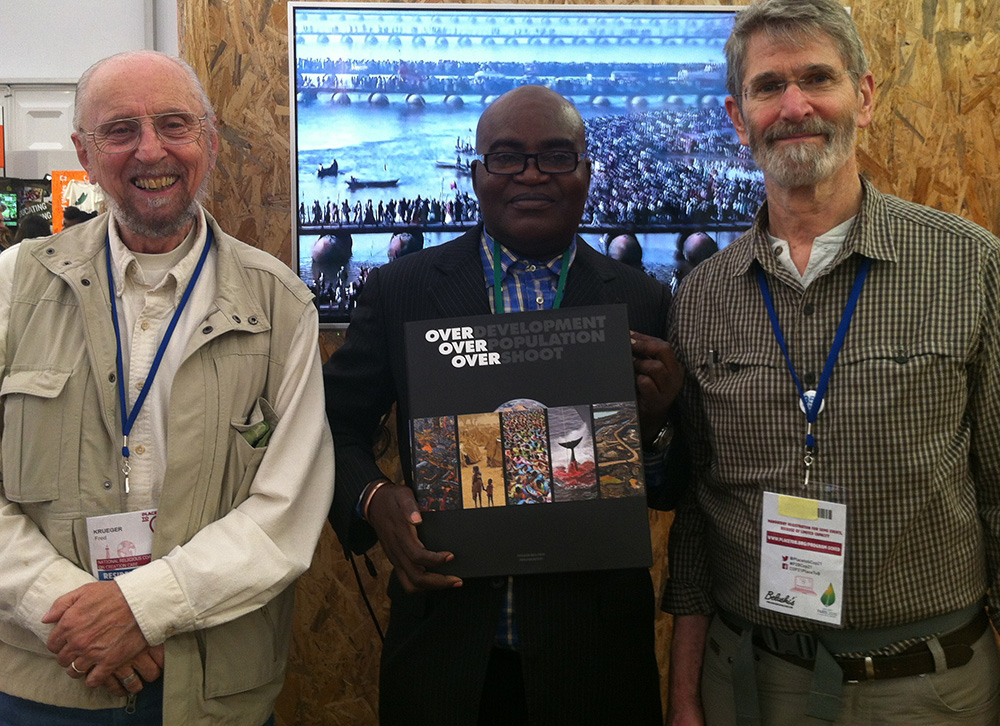 In the Climate Generations Area of the Climate Talks in Paris, people filtered through a number of displays. One featured a large TV screen showing a young girl from Burundi going to school to be a nurse. How, you might ask, does this young Burundian girl relate to climate change?

The Rights of Women and Girls Impact Climate Change Issues

The video focuses on reverence and respect for the natural world, which you might expect, but it also focuses on reproductive health, family planning, and girls’ education. It’s been viewed more than 6,300 times on YouTube and it’s part of the Global Population Speak Out campaign which aims to raise awareness and action around population growth by enhancing health and human rights around the world, one of which is girls’ education.

“If we could send all girls to school,” says Joe Bish, Director of Issue Advocacy at Population Media Center and one of the lead organizers of Speak Out, “we would see huge individual and global benefits. Education provides a means of understanding and interpreting the world. Imagine not being able to read. And educated girls will most likely have smaller, more stable families and space their pregnancies for their own health and the health of the children.”

Climate change conversations don’t usually extend to primary and secondary education opportunities or into reproductive health, but that’s exactly where organizations like Population Media Center (PMC) say people interested in sustainability need to look. If we want a more sustainable planet, we need to start with the health and rights of women and girls because improving the lives of women results in more family planning. This is important for recognizing individual rights, but also because it slows down population growth. The world population is growing too quickly to be sustained by renewable resources. Basically, reducing the carbon footprint, or any footprint, is not gaining ground when we are simultaneously adding thousands, or millions, more feet.

How many more feet are there? And does it matter?

It turns out that the world’s population grows by 9,000 people every hour — more than 220,000 people every day. Each of these people deserve healthy food, clean water, and a place to live and sleep.

Much of this growth is taking place in Africa, where governments and leaders are talking and acting in relation to population. Many developed countries choose not to discuss population, and we didn’t see much conversation about population at the climate talks in Paris because they don’t know what to offer for solutions to population growth or they think population too controversial a topic or they don’t think population connects with climate change at all.

But in Africa, governments and leaders poignantly understand that a very high fertility rate threatens their ability to manage the country’s future and to provide essential services for their citizens, not to mention prepare their populations for adaptation to climate change. In fact, many African countries are actively working with global agencies to address family planning, like the Ethiopian Public Health Alliance/Association (EPHA) and the massive Sahel Women’s Empowerment and Demographic Dividend Project in Africa’s Sahel region. Not only is family planning essential for strengthening individual health and security, but also for strengthening economies.

Of course, growing populations and strengthening economies will also lead to an increase in consumption rates, which means that a family’s carbon legacy in these developing countries will grow toward the levels of Western countries. A 2009 study titled “Reproduction and the carbon legacies of individuals,” looked at the relationship between population growth and global warming. It determined that the “carbon legacy” of just one child can produce 20 times more greenhouse gas than a person will save by driving a high-mileage car, recycling, using energy-efficient appliances and light bulbs, etc. “Clearly, the potential savings from reduced reproduction are huge compared to the savings that can be achieved by changes in lifestyle,” wrote the authors.

Because of these many social, political, economical, and environmental impacts, many of these African governments and government agencies believe population has a real and tangible place in political discourse and climate change negotiations.

How do we solve this without stepping on anyone’s feet?

Many people working on sustainability initiatives around the world do understand and appreciate that overpopulation is an essential component of what is driving climate change. They recognize that consumption and lifestyle choices are also important, but are also frustrated by why population is not being discussed as an important part of the long-term strategy. That display in the Climate Generations Area was the only display discussing population.

Inhumane, coercive population control initiatives in the past, like forced sterilizations or China’s one-child policy, make some believe that coercion is the only way to address the population challenge, which is fundamentally wrong. Not only are these approaches inhumane, they’re ineffective.

The truth is, we can stop population growth by enhancing human rights. There is an estimated 220 million women worldwide who want to use safe and effective family planning methods, but are unable to do so because they lack access to information and services or the support of their husbands and communities. As many as 50 percent of pregnancies worldwide are unplanned and 25 percent are unwanted. Maybe people don’t believe that populations of people are capable of making huge shifts in thinking and behavior on a grand enough scale without the government telling them how, but that’s not true. Population Media Center has been doing this for 17 years.

How can we change family norms about sending girls to school? Overcome cultural and informational barriers about family planning? PMC works with countries around the world using a mass-media approach. PMC creates long-running serial dramas, also called entertainment-education or soap operas, that role model positive choices and behaviors for the wider public. The storylines and characters weave through real challenges throughout the 1-2 years of broadcast, providing the audience with good entertainment, but also increased information.

The changes within the audience are dramatic, especially regarding family planning to increase individual and family stability and to reduce a family’s carbon legacy. Overcoming informational or cultural barriers for girls and women who don’t want to get pregnant is an important way to ensure healthier, more resilient current and future generations.

Let’s hope more people watch the Global Population Speak Out’s video and insist on action for girls and women around the world. In the long term, protecting the rights of girls and women may be even more important for the climate than our fuel sources, food systems, and water levels.

Are you sharing books or spreading the word?

Report your activities here so we can use your stories to inspire others with ideas about how they can take action. We appreciate your help.

Although the problems are vast, solutions exist. To create change, it takes people speaking out, demanding the solutions be implemented. Together, we can create change -- and save the world. #SpeakOut