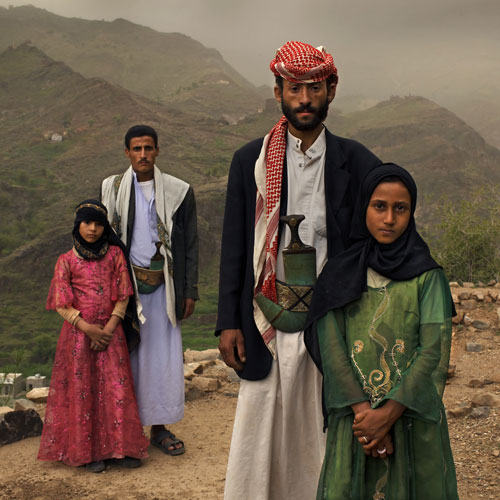 Child marriage is a difficult issue that is complicated by culture and religion, and especially by poverty. Now it seems that climate change is another complicating factor.

It might be surprising to find out that extreme weather could be increasing the rate of child marriage and other detrimental impacts on children. But in Ethiopia, failed rains, and then floods and drought in different regions, are severely impacting an already stressed population, and causing food shortages.

Ethiopia is in the grips of one of its worst droughts in three decades, and the government recently reported that child marriage is on the rise in the country, stating, “Children in assessed areas are showing distressed behavior due to food shortages, increase in child marriage and family separation.”

According to the international advocacy organization Girls Not Brides, child marriage is a major issue in Ethiopia where two in every five girls are married before their 18th birthday and nearly one in five girls marries before the age of 15.

The drought outlook is grim. The United Nations said that due to the El Niño weather phenomenon, the warming of the Pacific Ocean is causing hunger across east and southern Africa, and is “unprecedented.” More than one in ten of Ethiopia’s 92 million people are short of food.

During droughts, families often marry girls off at earlier ages as this earns them dowry and increases the girls’ chances of being fed by wealthier husbands. And the unfortunate truth is that where girls are not valued, marrying them off makes the girl someone else’s problem or burden.

In times of crisis and conflict – not to mention poverty – it is often girls that suffer the most. When there is little food, boys eat, not girls. When crops need to be harvested, it is the girl that is taken out of school, or not allowed to go at all. And when times get too tough, for whatever reason, it is the girl child that is expendable, and all too often, deemed marriageable.

Child marriage cuts across all boundaries, be it country, culture, religion, or ethnicity. One in three girls in the developing world is married by age eighteen. The United Nations states that by 2020, 142 million girls will be married by their 18th birthday if current trends continue.

Some of the countries with the highest rates of child marriage are also likely to be hit hardest by climate change. This includes Malawi, Niger, Mali and Bangladesh.

Bangladesh, for example, has one of the highest rates of child marriage worldwide and the highest rate of marriage involving girls under 15. It is also one of the most climate vulnerable countries in the world. Much of the Bangladeshi population is at great risk to rising sea levels, along with floods, cyclones, and even droughts.

Earlier this year, Heather Barr of Human Rights Watch wrote that climate change is forcing Bangladeshi girls into child marriage, and that natural disasters “encourage child marriage, especially for families watching their land erode, who rush to marry off their daughters before they are displaced.”

Unsurprisingly, child brides have little control over their lives and are often under pressure to become pregnant immediately, as their husbands and in-laws typically encourage early pregnancy. When girls are married at adolescence, pregnancy can be dangerous – pregnancy is the leading cause of death for adolescent girls in developing countries. And married teenage girls are less likely to use contraception.

In the face of a changing climate, what can be done?  Education is key, for everyone, but especially girls.  UNFPA says that girls with no education are over three times more likely to be married before age 18 than those with secondary or higher education.

According to Girls Not Brides, some other answers include:

Empowering communities to adapt to climate changes will also be critical. It is hoped that the recent Paris climate agreement will help countries and people become climate resilient. But in Ethiopia, Bangladesh, and many other communities, the need is now. Ending child marriage and ensuring girls go to school is where it can begin.