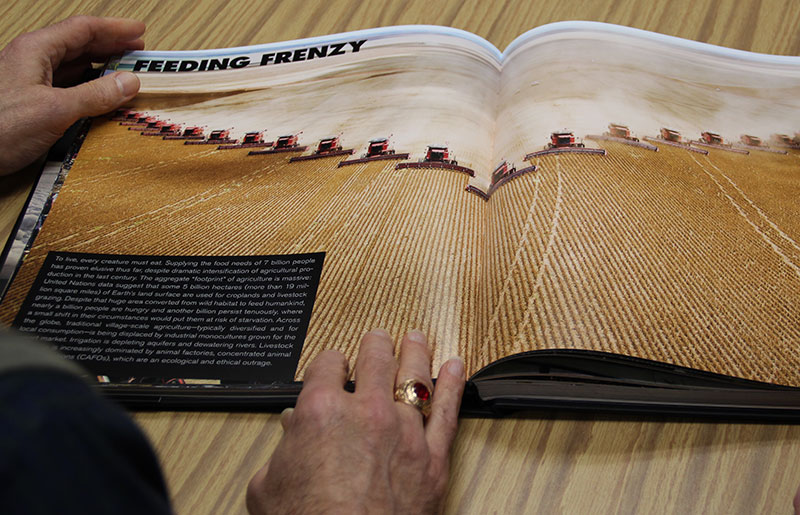 At the center of the Global Population Speak Out (Speak Out) campaign, is a book as large and dramatic as the topic it covers, Overdevelopment, Overpopulation, Overshoot (OVER). Speak Out and OVER are designed for those already engaged in environmental work, as well as new learners. Speak Out will be distributing advance copies of OVER to people requesting books to deliver to policymakers, opinion leaders, and other key audiences. Those who distribution proposals are accepted will be known as Speak Out Book Champions. The book will also be available commercially on March 15, 2015. It retails for $50 US.

Using an exhibit-format treatment with provocative photos from around the world, OVER hits the reader with emotion and disturbingly beautiful images while moving beyond insider debates and tired old arguments (yes, population numbers and consumption both matter when it comes to sustainability). The heart of OVER is a series of photo essays that illuminate the range and depth of the damage that human numbers and behavior have caused to the Earth—and the threat this poses to humanity’s future. It also features foreword, introduction, and afterword essays written by renowned women’s rights, population, and conservation experts.

Both OVER and the Speak Out campaign help spread important environmental and social-change messages and bring international attention to the burdens human population size and growth are putting on the planet’s ecosystems — and to emphasize the very actionable ways to improve human rights and human health, which will help stabilize population numbers sooner rather than later — all of which help address the many social and environmental challenges facing the world.

"Over-Over-Over features a refreshingly spare text. There’s an introduction by the guiding founder of the Population Media Center, William Ryerson; a foreword by Musimbi Kanyoro, a veteran defender of family planning as a fundamental human right; and closing comments from Eileen Crist, an advocate for the myriad other species that our own overwhelming presence threatens to push off the planet. You should read their intelligent remarks, because it’s well worth the time – even though you’ll be tempted to go right to the pictures. And understandably so: The real star of this book is the photography."

There are thousands of essays, articles and books dealing with population but “Overdevelopment, Overpopulation, Overshoot” provides a convincing new way of understanding the impacts of population size on human welfare and nature. Through well-chosen quotes, and stunning photographs, this largely visual presentation documents the realities and role of burgeoning human numbers on a broad variety of important areas including the destruction of wildlife and natural systems, air and water pollution, food insecurity and climate change.

A stunningly beautiful book, Over Over Over calls to mind the films of Godfrey Reggio, who some critics called to account for making the ugly—exploding napalm consuming whole villages—look visually compelling. Despite the beautiful images of often ugly things—degraded or devastated land and seascapes, wholesale slaughter of non-human creatures, human crowding and poverty—there is no getting lost and forgetting what is before us: the injury we have wrought as a species to others, the Earth and ourselves.

See What Others are Saying